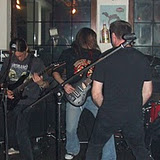 The Told just wrapped up recording of their first EP, Inter Vivos at Deathtone Studios in Endsdorf. They're in final mixing and will be mastered shortly after that before sending off for duplication and printing. The EP is expected to be available in early November -- check back for updates on how you can be one of the first to own their debut EP. The album has been produced by JR and Daniel. The full track listing for the EP is as follows: