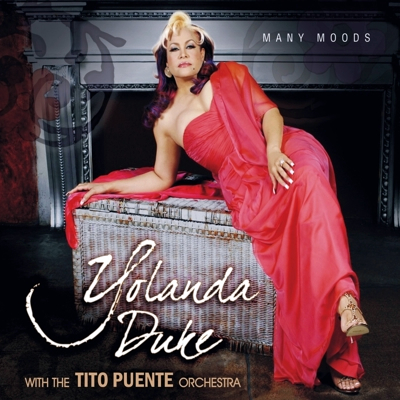 Amigos Music is pleased to announce the release of Yolanda Duke’s Many Moods, her newest––and most ambitious––CD. The album is the culmination of a long-standing dream that Yolanda shared with her dearly-departed godfather and mentor King of Latin Music Tito Puente––putting her personal touch on American standards and Latin favorites in a Big Band setting. This is the first Tito Puente’s Orchestra recording since Tito left us.
Producers Jose Madera and Johnny Rodriguez worked with La Duke to handpick this vibrant collection of popular songs, including I’ve Got You Under My Skin, Blue Moon, Misty, Muchos Besos and a medley of Myrta Silva’s tunes. She duets with popular salsero Jose Alberto ‘El Canario’ on La Peleona, which was first made famous by Machito and Graciela over 30 years ago.
Over 30 musicians contributed their talents to Many Moods, including most of her bandmates from the Tito Puente Orchestra. The production was comprised of piano, bass, timbales, congas, bongos Drums, four trumpets, four trombones, five saxophones, four flutes, fourteen violins and backup singers, bringing alive the custom arrangements created by Madera, Ray Santos, Marty Sheller and other arrangers to enhance Yolanda’s very personal interpretations of these classics.
The flavorings of Latin jazz, Swing, Bolero, Guaguanco, Salsa and Guaracha throughout the cd give La Duke the perfect musical stage to showcase her considerable range and unique ability to breathe new life into these timeless songs. Depending on which song you are listening to, you will be inspired to dance, sing along, mix yourself another drink….or all three.
The cd was recorded, mixed and mastered by Grammy award-winning engineer Dae Bennett and Jose Madera with the collaboration of Travis Stefl, at Bennett Studios in Englewood, NJ. It is lovingly dedicated to the memory of Tito Puente, Mario Rivera, Bobby Rodriguez and Ralphy Barbosa … … and there’s no doubt they would be very proud of their good friend, La Duke.

All strings orchestration by Jose Madera