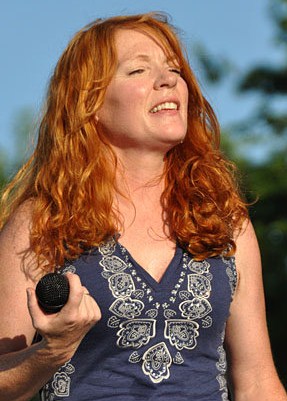 A veteran of the Second City Touring Company, suburban Chicago native Denise La Grassa made her mark in that talented troupe with a bit called "Make-A-Song," writing and performing tunes on the spot based on any topic the audience shouted out. That loose, carefree and immediate vibe still permeates her third album, the recent D.I.Y. release "April Dreams," but don't let it fool you into thinking the music is tossed-off.

With an impressive but never showy range and a self-assured, conversational delivery that brings to mind a jazzier Aimee Mann, La Grassa offers uniquely personal and melodically powerful takes on romance in standout originals such as "Yesterday's Replay" and "Best Day," while local producer Matt Thompson (the Mighty Blue Kings, Frisbee) captures the spare but perfect accompaniment of a four-piece backing band.

All of its songs, with the exception of one, were written by the multi-talented La Grassa and arranged by Matt Thompson, the ensemble's bassist. La Grassa's writing style is a direct reflection of the multitude of influences and inspirations that she draws upon as a performer. There are Beatles-esque numbers such as "Get Home & Give Me Love," deep-grooving bluesy numbers that would make Leonard Cohen proud such as "Deep Down Love," and emotional ballads including Matt Kanelos'"String of a Kite," which features a softly spoken groove in five that accentuates La Grassa's smooth vocal line. Thompson's arrangements are firmly based in the American pop tradition with just enough jazz, blues and soul to keep things from becoming monotonous. His use of strings on "April Dreams" and the seldom-used baritone guitar on "Best Day" add just the right timbre, highlighting La Grassa's vocal ability without getting in the way or burying the melody line in a mountain of sound.

La Grassa's melodic interpretations bring an emotional connection to each lyric and melody line, while her ability to make large melodic leaps with ease—with spot-on intonation—provide for some very interesting melody lines, often more reminiscent of a saxophone or guitar than a vocalist. One reason why the album avoids any stagnation is La Grassa's constantly changing vocal tone and timbre: she moves between dark and sultry to light and breathy, and everything in between, with the greatest of ease and without sounding disjointed or unrelated.

April Dreams is entertaining on emotional and musical levels. The lyrics are masterfully crafted, the melodies sticky and the band tight. While the album is not going to fall into the modern or traditional jazz categories, the mixture of jazz, pop, blues and folk is a catalyst for highly creative and emotionally charged playing.